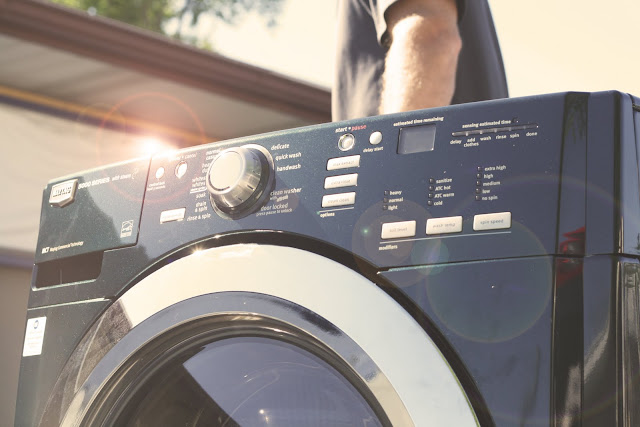 Today our washing machine (let's call him...Ken...we bought him at Sears) told me in a very high-pitched squeal that he was quitting his job. He was done washing load after load of laundry after nearly 9 years. Clothes wore by a plumber in the summer heat, swimwear full of sand and pond scum, and kitchen towels that are occasionally forgotten about until our entire first floor reeks of rotting milk and sauerkaurt.

Most disappointing about Ken's resignation, was the fact that it came just after the aforementioned kitchen towels were thoroughly soaked with water & bleach. So I have to pull the wet, and probably hazardous towels out of Ken (I hope it feels like I'm ripping them through his urethra) before we can replace him with our new washing machine, which I've lovingly named Tag.

Tag is a delightful shade of dark green, although he looks blue in the photograph.  Trevor explained to the salesman that his low-maintenance, unpretentious wife wouldn't give a shit if her washing machine was green...and he was right.  We bought a top of the line washer for a rock bottom price because of the color.
So thanks to all of you picky bitches who order green appliances only to decide later that they don't complement your laundry detergent bottles.  My checkbook balance appreciates it!