I made my mind up a long time ago on a lot of things.  I have been sure of the ways of the world.  I’ve known lots of really important stuff and had opinions on everything.


At one point in my life, I hated baseball. Watching baseball was worse than watching paint dry.  The only reason to go to a baseball game would have been to socialize, drink or make someone else happy. I mean, most of the time you sit too far away to even sit and fantasize about the hot young guys swinging the bats.


At one point in my life, I knew for sure, I was NOT ever going to be one of those parents who went to ball tournaments all weekend.  I would not drive all over the state only to possibly drive right home when the kids lose their first game.  Not me, I wasn’t going to be the parent who emailed siblings and aunts & uncles about game times.

At one point in my life, I was convinced my time was more valuable than a kid’s baseball game and I would have better things to do. I knew that little kid’s activities were not important enough to schedule your life around them. At one point in my life I believed parents who spent their lives at ball games, dance recitals or waiting in the car outside of piano or guitar lessons, were a little off their rocker & totally out of touch with what was really important.


I was so smart! I knew it all. To all of you childless adults, relish your wisdom now, because one day you may be taken to school (so to speak) by a 9 year old in baseball cleats.


In the last 14 days alone, Owen has played baseball in practice, camp, games for his Traveling and Rookie leagues, a 10 and under tournament, and a 3rd vs. 4th grade fun game. He has been to Deerfield & Madison, played teams from Janesville, Sun Prairie & Fennimore. He’s played catch with his parents, his uncles, his cousins, his sister, his friends and even some of the Madison Mallards baseball players.  He has played first base, outfield, pitched and sat on the bench. He won and he lost.


Which means in the last 14 days, I’ve enjoyed watching him in practices, Traveling and Rookie League games, a 10 and under tournament and a 3rd vs. 4th grade fun game. I’ve been to Deerfield & Madison, and cheered across the bleachers from parents of Janesville, Sun Prairie & Fennimore kids. I’ve played catch. I’ve been nervous & relieved as I watched him swing the bat, catch the ball and throw strikes. I’ve watched him with pride, gracefully shake hands with players from the other teams…when he won and when he lost.


Remember those crazy parents…the ones who 9 years ago I thought were completely out of touch with what is important?  Well, I’m turning into one of those parents!  And because baseball is a team sport, I’m socializing with others like me, and guess what…we are not all out of touch at all. Most of us are completely in tune with our children, we know what makes them happy and we realize there is no time better spent than time spent with your child and because kids grow up so fast, why fight it.  If your kid loves baseball, love baseball with him. Share it! Soak it together up while you can.


As for being a little off their rocker…anyone who decided to embark on the parenting path must be insane, right?! Maybe not quite as crazy as these two guys... 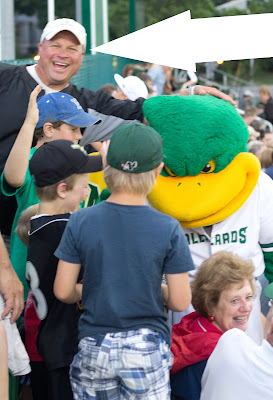 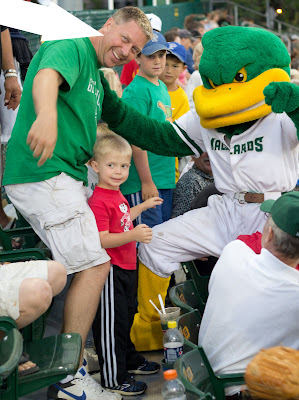 but a little nuts nonetheless!


It looks like back when I was a know everything; I didn’t REALLY know much at all. How would I have known why parents do things? I wasn’t a parent. I hadn’t lived it.
As I’ve aged, matured, grown…whatever it’s called when people understand the world around them better, I’ve realized I really only know a few things for sure...
Everything else is up for grabs...better get your catcher's mitt.