What happened to May and June?


Not a whole lot is new since April, just normal beginning of summer stuff. Owen finished Kindergarten, work slowed down for me, work picked up for Trevor, and we had birthday cake everyday from May 31st-29th! Our family pretty much has all of the Stephenson birthdays from May 31st-July 5th. The only exceptions are my kids and Bryce.

Owen's school year ended with the Kindergarten Car show and a trip to the Zoo. He made a Chevy Silverado with his third grade buddies for the car show. He did a great job, and he really liked his buddy, Jack. I think Owen will be a great buddy someday, because Jack was such a great role model.

The zoo trip was fun. It was a beautiful day and Owen played on the new rain forest play equipment for the first time. Of course, he spent most of our time in the snake area! He and his friend Sara discussed their marriage arrangements...it went a little something like this:
SARA: "Owen, I'm gonna marry you."
OWEN: "Well, if you gonna marry me, you will not get up and feed a dog in the morning. We will be feeding snakes, because I am going to live in the rain forest."
SARA: "That's fine, you can feed the snakes."
OWEN(as he passes the alligator cage): "Oh, and we have to feed the alligator too!"
SARA(after a slight pause): "Maybe I won't marry you."
Debi(Sara's Mom) and I were laughing pretty hard at this little exchange. For now, it seems that, we are safe from having Ben Heisner as part of our in-laws!

On Monday nights Owen plays Coach Ball. It is basically t-ball without the tee. Everyone gets a hit, no one gets out and no score is kept. He has started Level 2 swimming lessons and has Art Camp this week. He was on the Shake Rag Alley float in the 4th of July parade, and Super Summer School starts next week. Geez, he is only 6-I can't wait to see his schedule was a teenager!

I finished the Mad City Half Marathon on May 25th in 2:15:15. I crossed the finish line holding hands with my BFF, Jamie. Who so kindly ran back to pick me up so we could finish together. It was a good experience. I may even do it again sometime. I don't recommend betting on it, though! I haven't been running much since, I've been doing some walking. Just this week, I've started p90X with Trevor's cousin Jaclyn. WOW! It is a killer workout. I've done it four days now and like it a lot. If soreness means it's working, then look out...Jaclyn and I may just turn into American Gladiators!

Trevor passed one of his Master Plumber tests in June. He missed the second one by 4%. It sucks because the information on the second test is new since Trevor was in school. So he basically guessed on it and got that close. He plans to retake it in September, after he spends a few Tuesdays at school getting a quick tutorial. He is super pumped about going back to school to learn about stuff he will never need.
Trevor turns 30 tomorrow. We are going tubing on the Grant River, then chilling at our house with some friends. It is crazy to think that we have been together through our entire 20's and are starting a new decade! And we haven't aged a day.

Sophia got her ears pierced last week and looks adorable. The second ear was a little tough to get since the first one hurt, but once she saw herself the tears dried up fast! She said, "I look like a mom!" She has started level 1 swimming lessons and is doing great. She loves the water. Today we hung out at Atticus's (Owen's friend and distant cousin) pool and she kept stepping off the bottom step to go under and hold her breath. That was not nerve racking at all! We've had lots of time alone this week, and she is a lot of fun. She likes to dance, play babies, and help with prepping and cleaning up meals(she is really good at unwrapping frozen pizza and throwing the wrapper away).

HAPPY BIRTHDAY, AMERICA! What a great party in your honor. I can't decide which would be our favorite part- getting candy hurled at us during the parade today and the bug-infested fireworks show tonight! Hey, maybe next year we could be the pinata and get the crap kicked out of us with a baseball bat! 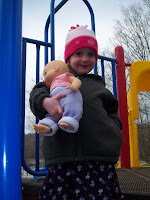 Sophia and Baby Katie at the park. 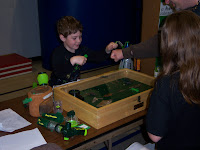 Owen with his bug collection at the Science Fair. Remember the awesome story from my last blog? 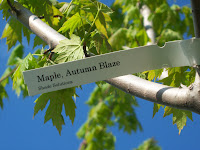 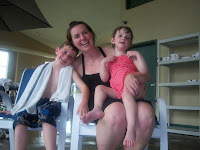 Owen and Sophia just out of the hot tub with the Marathon Finisher. 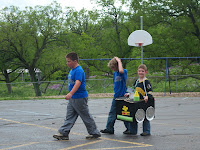 Owen and his buddy, Jack, driving his black Chevy. 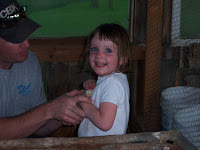 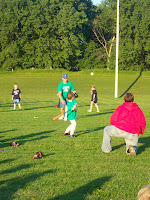 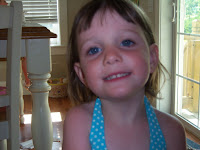 Fancy Pants with new earrings! ( I know it's hard to see) 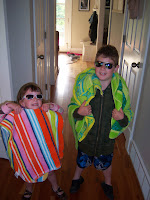 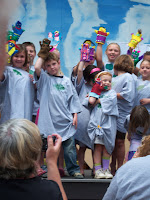 Owen and his friends at Art Camp.