Pay Attention...could this be that last time?

Tonight as I was putting Sophia in bed (she has been asleep since 5pm-the nice weather wears her right out) Owen was sitting on his bed with his Magic Treehouse book open to Chapter 4. We left last night on Chapter 2, so while he waited for me he read one chapter. I asked him what happened so I could see if he comprehended what he read or just flipped pages. He repeated nearly word for word the meat of the story.

I have always known Owen was a smart little guy, and that eventually bedtime would not consist of 1 hour long read-athons. (Imagine me reading gibberish as I fall asleep in his twin bed on a nightly basis) Since Owen was 6 months old, reading books was something he ALWAYS loved to do. He chewed the corners of his Going On A Bear Hunt board book until they were rounded. We read the Big Red Barn book to him so many times that he could tell me the words by his first birthday. This is something he always loved, but has needed assistance with...that is no longer the case.

He can read on his own. Which I have known along time, but I have never seen him willingly reading a chapter book to himself. Occasionally, when he is over tired and crabby he will be forced to lay down in bed-where he has the option of sleep or reading. He usually picks out a nature book to read the captions as he looks at the pictures.

Thank god, I noticed tonight that he is starting a different stage as a reader. Because as I gave him an extra long squeeze tonight-I realized this sweet bedtime routine will soon end. One day he will not want me to lay with him reading about barns, bears, bugs, snakes, pirates, Captain Underpants, or Magic Treehouses.

After that extra long squeeze, I read another chapter to him trying not to cry. I held the crying in until I typed this post. I should have gotten flood insurance for this keyboard! 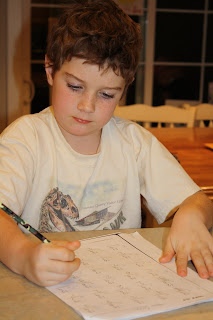 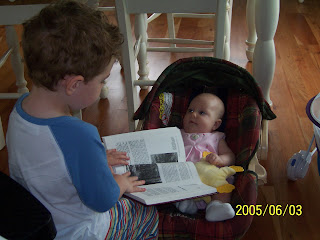