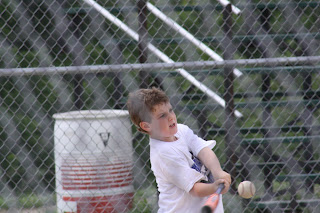 This week has been a little bit CRAZY. Owen had baseball camp all week and both of the kids had swimming lessons. The high temperature on Wednesday was a record low in our area for June. It didn't even make it out of the 60's which made for some purple-lipped kids after a 10am swimming lesson. Owen had a great week at camp; he has decided that baseball is "his sport". Sophia went off of the diving board 3 times today; although she has absolutely no idea how to swim and doesn't care to learn...if there is something that she can jump off of she is going to do it not matter what! 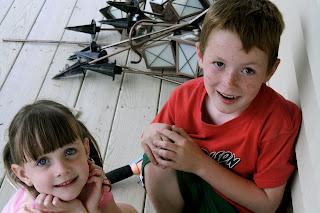 The kids had some friends over yesterday and by the time it was time to take everyone home; they had collected 5 snakes and a giant toad! Blaise is a good friend of Owen's and he has the best freckles EVER! So I had to get a picture of them. In this picture, Sophia is explaining to Blaise that the tiny garder snake in the cage with the toad was going to be OK. Not that Blaise was concerned...I am pretty sure he was hoping to see something get gobbled up!

*DISCLAIMER-No animals were hurt during this play date- just in case some nutjob person from PETA happens upon this post. 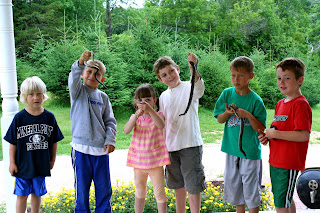 Have a wonderful, safe 4th of July weekend!