Tonight I have been doing lots of sorting and organizing using the fabulous iPhoto application on my new iMac. Most of you probably already know how smitten I am with this computer already, but just in case you had any doubts...I LOVE, LOVE, LOVE this new computer!
I bought the computer with a small raise I received earlier this year-due to the fact that Nutrition Educators are the lowest paid academic staff on the University of Wisconsin's payroll. In layman's terms- I make hardly any money, and being only half time, I make half of hardly any money.
So I put the money to good use and put it toward a much needed computer. Sounded like a smart, well thought out plan right? Until the state decided to make every state employee take mandated furlough days resulting in an approximate 3% decrease in pay for the next 2 years! Just goes to show you that even the best laid plans can be destroyed with a stroke of the Governor's pen.
In case this sounds like complaining, I want you to know that I am happily taking these furlough days! I understand that people are a whole lot worse off than I and if my 3% will help the state dig out of a financial crisis, I am more than willing to do it.
Anyway, back to the reason I am even posting tonight- While sorting the photos, I found my very first digital picture taken in December of 2004. I was preggers with Sophia. Trevor and I thought that a digital camera would be a good investment as well as a space saver-I have a butt load of duplicate pictures of Owen's first three years in totes, boxes, albums and scrapbooks all over the house. So to save money on developing photos, and places to put all of the photos, we went digital.

It was just an inexpensive Kodak Easy Share, but I've been hooked ever since! Of course with a kid as cute as this who wouldn't be? Owen is not even 3 years old in this shot...I can't believe how fast the years go. I have upgraded cameras a couple of times since then, but this first picture needs no improvements...it is as sweet to me now as it was back then. 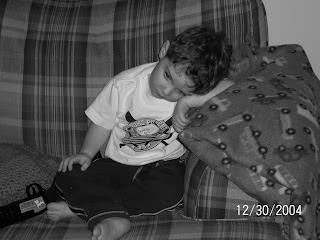