On Easter I watched The King's Speech.  I have been raving about it ever since, not only because I lust for Colin Firth, but because it's a lovely movie.  It's such a great story of just how crippling insecurities can be when not dealt with. No matter who you are, you can keep from reaching your highest potential, if you don't believe in yourself. The story proves that dysfunctional family situations linger long past childhood, but it is never too late to face your past, deal with it and move on.
If you've not seen The King's Speech, watch it and you will understand what I'm talking about.
So yesterday, after a long day of working outdoors we came inside to chill out.  It had been a long week. We've been dealing with some kind of virus, bi-weekly baseball practices are in full swing and we all stayed up late Saturday night so rest was needed.  Resting for Me, Trevor and Sophia is napping, which we can do about anytime, anywhere. Owen, on the other hand, cannot nap.  He can rest by reading or watching a movie, but the boy only sleeps at night. Seriously, it's crazy!
When Owen saw The King's Speech was OnDemand, he wanted to rent it.  I think, mainly because I mentioned the movie's funny swearing rant, but he insisted he really wanted to see it.   Knowing Owen has heard (a couple) swear words before, and since he seems to understand their inappropriateness, I decided to give it a go. The rest of the movie has such a great message, I thought for sure he would come away with more than just some new British vulgarities.
Cut to 3 minutes after the swearing scene... 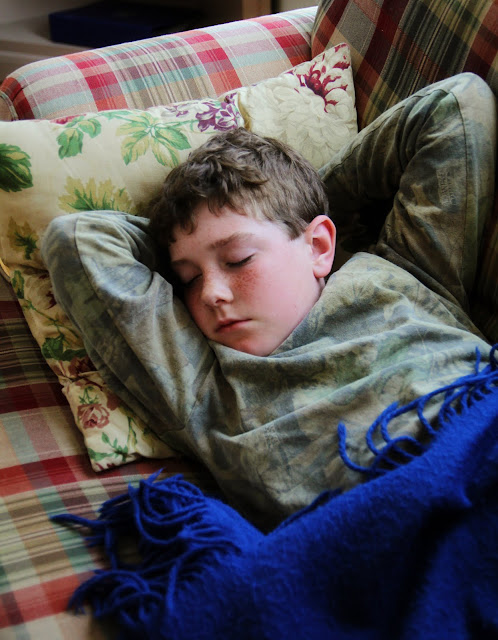 Yep, this kid was able to stay awake long enough to hear Bertie's "Fuck, Bugger, Ass, Shit, Bugger, Tits, Bugger, Bugger, Fuck!" monologue, but not entertained or moved enough to bother staying awake for King George VI's moving wartime speech.  Had I not rented the movie he'd be laying there, watching the same SpongeBob Squarepants re-run for 546th time, wide-ass awake! Seriously, what a little Shit Bugger.
The point is-if you're an adult and haven't seen The King's Speech - watch it. If you just want your 9 year old to get the gist of the great story without letting them hear the 30 second cursing rant, I've included the SpongeBob CliffsNotes version below...
Colin Firth guest stars as a stammering SpongeBob Squarepants who is receiving speech therapy from Patrick Star, an unorthodox stutter whisperer.  SpongeBob must be able to speak in public because he is next in line to take over the Krusty Krab after his boss Eugene H. Krabs V dies, and his horny superior, Squidward, decides he's rather nail Sandy-the slutty American squirrel, than govern the empire.  The dramatic ending will show SpongeBob uniting the citizens of Bikini Bottom, with a moving stammer-free statement, just as the evil Sheldon J. Plankton declares the Chum Bucket the master restaurant and vows to have total world domination.