Yesterday, I was privileged to transport a handful of 8th & 9th graders to Southwest Wisconsin Technical College to listen to Jamie Nabozny, tell his inspiring story. If you are able to watch his film, I strongly encourage it.

After watching the video - which to be honest, doesn't get any easier, this was my second time viewing it and it still choked me up - Jamie spoke to the students about bullying.

I was thrilled when he touched on an important facet of bullying.... Intent & Impact.  I believe, all too often, older kids and adults, feel like they are innocent from hurting others beside they "didn't mean it that way."

I struggle with this myself. My sense of humor can be lightening quick and razor sharp, and there are times words are out of my mouth, long before I've even thought about who they may be hurting.

He started off by asking the students if they could talk about the difference between calling someone a "faggot" and saying the phrase "that's so gay." A few brave kids raised their hands and came to the conclusion, with Jamie's help paraphrasing, that "that so gay" is accepted as a universal statement where gay means the same as stupid, lame or ignorant.  The word "faggot" they pointed out, was more of a direct attack on a person. Calling someone that word implies the individual is bad, wrong or less than, because they are a homosexual. 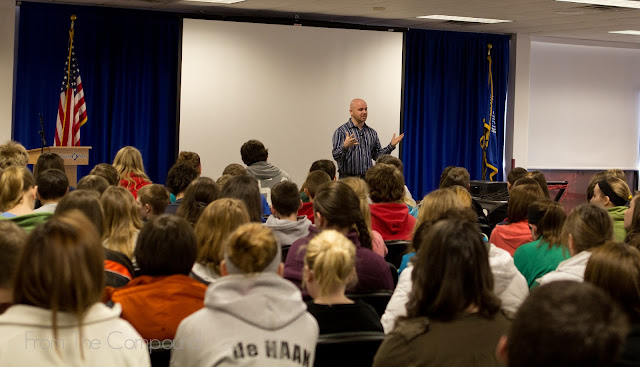 Jamie tried to help the kids understand, that most of the time, indeed, the intent of these phrases are different, but went on to explain, the impact on him and other gay individuals is very much the same! Saying "that's so gay" hurts, just like being called a "faggot" hurts.

Jamie told the students to replace gay, with his name, the next time they want to use the phrase.
"Seriously, an English paper due on Monday?! That's so Jamie Nabozny."
Makes a difference doesn't it?

As parents, we need to tell our children, if they intend to label something stupid or dumb...then they should. Let them shout it from the rooftops, "That is DUMB!"
But...they need to know it is NOT OK to belittle a group of people in the process.

I may start to replace other words with Jamie Nabozny...words like inspirational, powerful and motivating.