How big is your brave - Part 2

Trevor and I started dating on February 17, 1995. We been together ever since. Our wedding anniversary is May 6, 2000. We have 2 amazing kids and have created a RICH and full life. But the life was only partly ours because every single day of the almost 19 years together, I had a secret. The secret was that inside I viewed this relationship as mine to screw up. Whatever happens - it's my fault. Unless it's something great - then it's just dumb luck. I repeatedly beat the crap out of myself for every single thing that wasn't perfect, and when stuff is pretty darn perfect - I just wait for the ceiling to crash down around me. I tried to keep Trevor in the dark from how messed up I was because I knew if I didn't it would all end. And it did...but not the way I'd been telling myself it would.

On February 12, 2014 something intervened and that's where that chapter ended. Quick and dirty and finished.

Let me start at the beginning of this story: on Tuesday afternoon - I went to the bank where my accounts were all near bare bones status. I got a little cash and drove all the way in Lancaster for Owen's wrestling match alone thinking about our empty accounts. I've dealt with our finances 100% on my own for the entire duration of our time together so this wasn't a totally new experience. But I haven't been really working in almost two and a half years so things are a bit different than before.

Now don't get me wrong - I've been working. I've done a bunch of photo shoots, I've done social media & consulting work for a number of companies, I coordinate the hell out of an amazing leadership program that I love, and I've mixed paint, cut keys, and talked shit to local carpet layers. All of which have been paying jobs. But I'm also kicking my ass all over the place for little or nothing - I co-wrote a book, raising almost $30,000 for our school district, I've spent 2 years on the school board sitting in endless meetings with disengaged board members who don't seem to respect my time, I've been asked to be part of committee after committee by people who are paid a lovely little salary with benefits just to be on committees.

So I watched Owen wrestle, took Owen to A&W after his meet, cringed (with shame and dread) as I paid the bill knowing fully well he have hardly any groceries in the fridge, drove home and when to bed. At about 2am, I woke in a complete and total panic. I couldn't even breathe. I needed help. I was so scared, I didn't know what I was going to do. We have no money, we have credit card debt, the kids need braces, the kids will want to go to college, the kids need to eat...my head was spinning! I didn't sleep another wink. I knew I needed help. I was still thinking I just need to get me head on straight about budgeting.

It still never really crossed my mind to tell Trevor, because I thought I knew what that meant. He would leave. He would finally realize we married a total worthless piece of shit who messed up his whole life and I would be alone with my kids and no job and nothing.

The minute the kids left for school Wednesday morning, I texted my uncle - the most money savvy person I know who I knew would love me unconditionally even when I had to admit I was in trouble. He was the only person I thought could help me. I wanted nothing but mentorship so I could figure this financial shit out once and for all. When he called me back I was a mess. He finally asked about Trevor and I, for the first time, expressed my fears out loud. Then he said words that changed my life. He said "Julie, that's not how a marriage works."

For the next 5 hours, I sobbed and prayed in the fetal position. I finally realized, after 14 years of being Trevor's wife, I was in real marriage - not in some insecure 17 year old girl's version of her parents crazy, poverty enabling divorce. It was the most frightening experience of my life. After another sob-filled phone call to a dear friend, I texted Trevor...and for the first time in 19 years I allowed him to be my partner in this marriage. A full partner by being completely (snot and tears streaming down my face) honest with him.

Poor guy got hit my a crazy train at 12:30 on a Wednesday afternoon and then had to go back to work.

And because I married the nicest guy in the whole freaking world - he handled it like a champ. Hours later as my tears dried up and the kids arrived home from school, I could feel the freedom that comes from letting go of shame. I could breathe deep again, rather than the shallow, panicky gasps I'd become familiar with. It was during those deep breaths that I could see that the situation was not that bad, that we had options, that we'd get through this just fine.

As Trevor left for bowling that evening, I went to my coat pocket to give him the rest of the cash I had left over from the night before at A&W. I knew I had some singles, a five and a twenty dollar bill left. All I could find was the five and a couple of ones. My calm breaths started to shorten and feel constricted again. The shame and worthless feelings and tears came flooding back. Once again, I was the moron who could lose $20 when it felt like the last $20 we had. Trevor gave me a hug and told me it would be fine, and I actually believed him this time because I knew I wasn't expected to deal with mistakes and misfortunes alone. This was a marriage - we handle missing 20s, credit card debt, and everything else TOGETHER! It felt good. Like the pressure cooker had been turned off. I slept like a rock that night, and in the morning on my way to a meeting I found this laying on the floor in my garage. 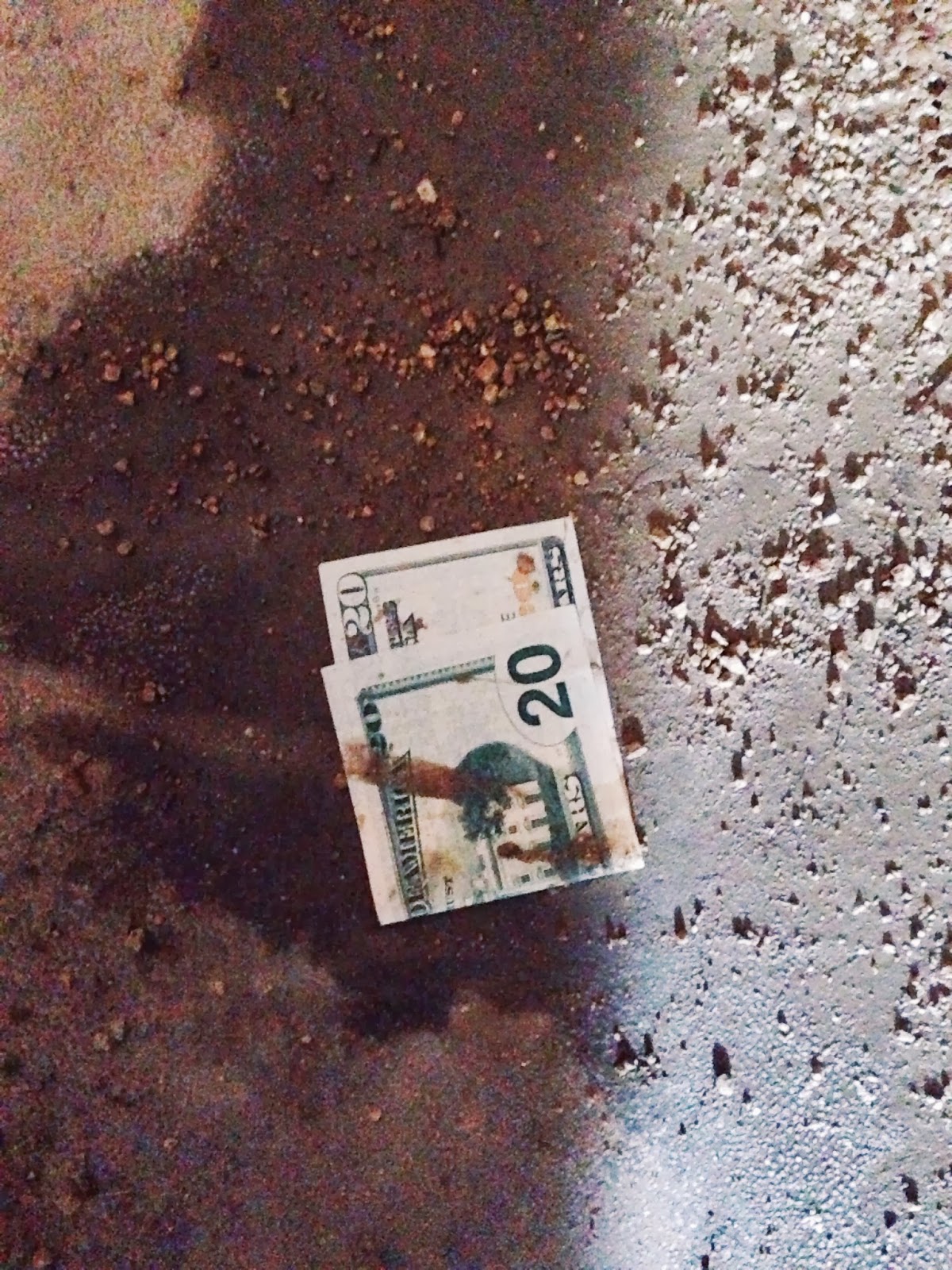 I literally looked up at the unfinished garage ceiling and thanked the universe for my wonderfully messy and perfectly imperfect life. Like this chapter of my life - this blog ends here - I'm ready for a fresh start!  I hope you can continue to follow me at my new blog: I Am George Bailey

Julie - From The Compound.