Well, since my last post I've been to the gym 6 out of 7 days, which included running 3 miles today. For me that is big! I must say the runner's high is pretty good...I got a lot accomplished today after the workout. Tomorrow is my second personal training session...last Saturday I could almost not even move! I am keeping my fingers crossed that soreness was the worst of it.

Our family went to see Annabelle Busch and her parents. She is a cutie. Sopherbabes was not at all happy to be told that she could not touch the baby. She told me that she didn't have germs..."only BGoin has germs"! After our trip we went to Mickey D's and were nearly forced to fight some thirteen year olds who were acting like idiots in the play area. I am pretty sure one of the kids was Molly's son!!

Molly, Summer and I went to listen to Crimson Head in D-ton on Saturday night. They sounded...LOUD! Just to show you how old I am getting - The McKillip's cousin gave me earplugs to wear! What can I say...I love the ROCK!

So the Packers lost about the most exciting football game I remember watching. I didn't suffer from PPLS-Post Packer Loss Syndrome, but my co-worker Paul is still on the mend from his.

Sopherbabes was sick, with the same thing BGoin had last week, big surprise! She is also done taking naps in the afternoon, since she will not go to sleep until like 11pm, and when I make her stay in her room she cries until she pukes. Which is awesome at 10:30, after she had 3 Oreo cookies for her bedtime snack. Black vomit is the best!

BGoin went to school and told a middle school kid that Heath Ledger died. When the boy said he didn't know who that was, BGoin went on to tell him "he was the cowboy in Brokeback Mountain"! NICE...maybe we should turn off Entertainment Tonight during dinner!

Pictures of the Week: 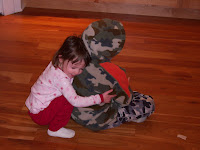 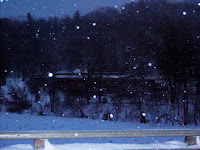 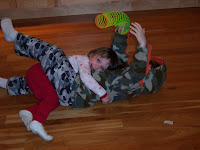