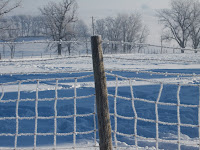 May I just start off by saying Seriously, Mother Nature- enough already! I'll admit that the pictures are pretty, but I could take pictures of birds and trees budding! With that out of the way, here is a look at our week.


We went to PDC for my Dad's birthday lunch. It was nice. Grandma Hazel and Bob & Paula were there along with Jed, Summer, Jenni & Jared and US. Dad seemed to have a good time. I am grateful that he is closer now living in Iowa. We can see him on days like this without a whole lot of effort.


Still going to the gym. Have lost inches from waist and thighs already. My Body Fat Percentage dropped by a point too. All in just 2 weeks! My weight hasn't had such a positive change, but I am not letting that get me down!


Owen went to his friend Grady's house on Wednesday night. They had a great time. He also went to his classmate Morgan's birthday party on Saturday. He was quite the social life, sadly more than his parents most of the time.


Sopher Babes has been doing great with not napping. Our nights are much more relaxing! She actually has fallen asleep twice this week without supper. She slipped on the ice tonight and fell. She has a fat lip and scraped up chin. Again, Thank You Mother Nature!


Go Giants Go! We are all happy that the Super Bowl turned out the right way! I think that the Patriots got a little godsmack for the whole cheating thing earlier in the season. Cheaters Never Win...wait... Cheaters Never Go 19-0 anyway!


Tre-Tre and his boyfriend Jed, went out with Eric & Adrienne on Saturday night, they had a lot of fun...I mean drinks! My friends hung at my house and we played Loaded Questions, where I was voted "Most Offensive Person in the World" again! How does that old saying go? "Who needs enemies when you've got friends like these!!!!" Something like that.


Thats about all for this week...tune in next time for another exciting edition of...
"Chronicles From The Compound"!

Pictures of the Week: 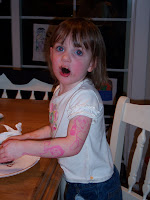 The kids were into having "tatoos" drawn on their arms with markers. Owen got what he was into-Pirates and Dragons. Sophia got what she loves-Babies and Bottles. When asked what her tatoo was she replied, " A Creepy Baby". Check out the sweet TATS! (Sophia happens to be eating a cupcake, just in case you're wondered what that black stuff is!) 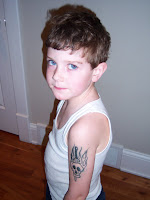